To support the development of digital technologies, ARVALIS has developed its skills in the fields of big data processing, the modelling of biological cycles, sensors, decision-making tools, and machine guidance. With these developments, new roles have sprung up within the teams: optical electronics engineers, bio-statisticians, data scientists. As part of a collaborative and open research approach, ARVALIS has joined forces in the first instance with IDELE, ITB and Terres Inovia to produce an outdoor experimentation set-up called DIGIFERMES®.

These DIGIFERMES® "digital farms" implement connected tools and services under real-life conditions. The two geographical sites of the DIGIFERMES® (Essonne in the Ile-de-France and Meuse in eastern France) can measure the performance of tools and services in a variety of production contexts (innovative major crop systems, organic agriculture, crops under permanent cover, cattle pasturing and rearing).

As well as serving as demonstration platforms, these DIGIFERMES® can be used to test new ideas and prototypes. The goal is to help inventors transition from concept to practical work. Starting this year, a series of projects has been undertaken with start-ups and major corporations, to conduct full-scale experimental tests. 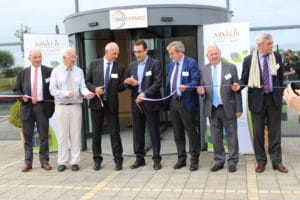